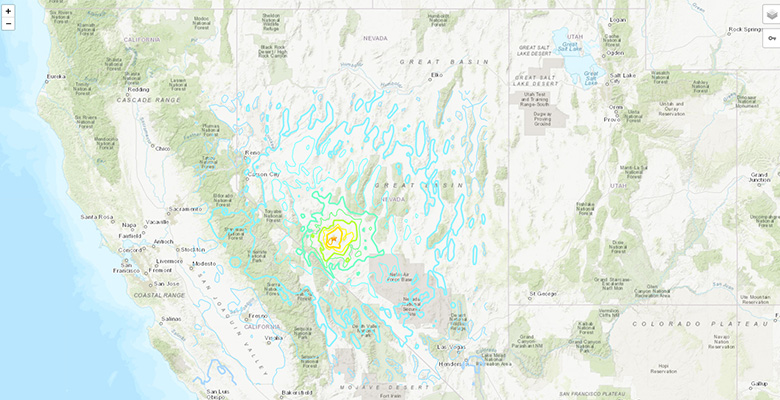 The May 15, 2020 M 6.5 earthquake 56 km west f Tonopah, Nevada, occurred as the result of strike slip faulting in the shallow crust of the North America plate. Preliminary focal mechanism solutions for the event, which describe the style of faulting in an earthquake, indicate slip likely occurred on a steeply dipping fault striking either east-west (left-lateral) or north-south (right-lateral). This earthquake occurred within the Walker Lane, an active zone of seismicity roughly aligned with the California-Nevada border. Tectonically, the Walker Lane accommodates up to 25% of the North America:Pacific Plate motion, with the remainder mostly accommodated on the San Andreas fault system.

Be ready for more earthquakes

What we [USGS] think will happen next

About this earthquake and related aftershocks

About our earthquake forecasts

No one can predict the exact time or place of any earthquake, including aftershocks. Our earthquake forecasts give us an understanding of the chances of having more earthquakes within a given time period in the affected area. We calculate this earthquake forecast using a statistical analysis based on past earthquakes.

Our forecast changes as time passes due to decline in the frequency of aftershocks, larger aftershocks that may trigger further earthquakes, and changes in forecast modeling based on the data collected for this earthquake sequence.